This September, world leaders are coming to New York City for a landmark Climate Summit at the United Nations. But if we look at the progress (or lack of) made at previous Summits, we shouldn’t trust those leaders to take action on their own — we need to show them that the world’s people demand action right now.

Join the Health contingent at the People’s Climate March

9:30 am – Press conference in front of Roosevelt Hospital

For more information on the health contingent, visit peoplesclimate.org/health

20 NYC hospitals have shut down over the last 10 years

Currently, the State of NY decides which hospitals and services are shut down in NYC. While closed down hospitals are routinely being turned into condos, the State of New York has failed to replace these vital resources. It’s time for NYC communities to have a direct say in the health care decisions that affect our lives and our health.

It’s time to put a stop to the closure of our hospitals.

Join us to find out more

This Saturday, March 8th at 10am at the site of the soon-to-be Koch Pavilion, a new hospital in New York’s wealthiest neighborhood, the Upper East Side, named for New York City’s wealthiest resident, oil tycoon David Koch. Koch, with his brother Charles, personally finances many of the most far-right wing causes and organizations in the U.S. 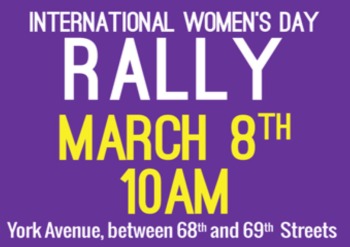 Get Your Tickets Now!

Mercy Killers is a compelling, one-man play by Michael Milligan.

Joe loves apple pie, Rush Limbaugh, the 4th of July and his wife, Jane. He is blue-collar, corn-fed, made in the USA and proud, but when his uninsured wife is diagnosed with cancer, his patriotic feelings and passion for the ethos of life, liberty and the pursuit of happiness are turned upside down.

+ Healthcare is a Human Right + 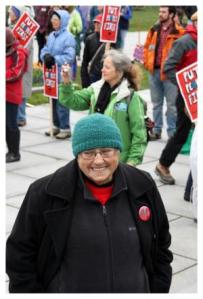 Join us on Human Rights Day, December 10th, to honor the late Peg Franzen, member of the Vermont Workers’ Center and a key leader in Vermont’’s pioneering Healthcare Is a Human Right Campaign.

This event is free and open to the public. 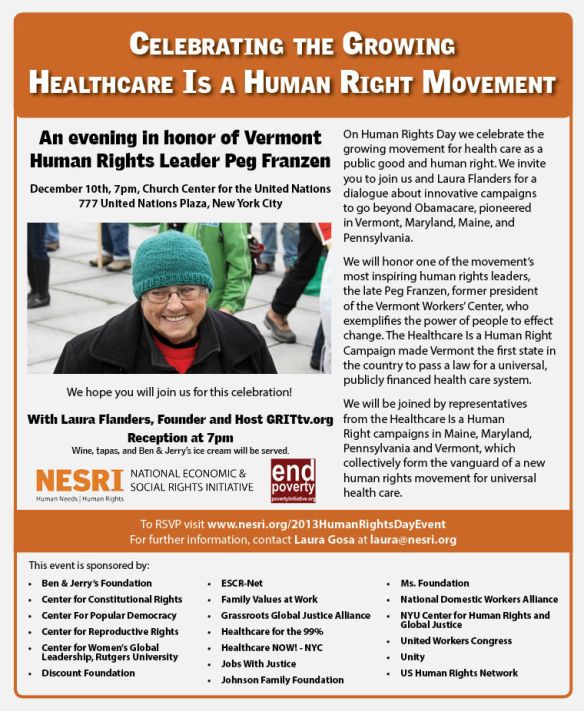 The Politics of Hospital Closures in New York 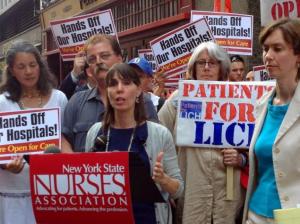 Campaigns against hospital closures have generated so much support that the topic was successfully vaulted into the NYC mayoral race. Threats to close hospitals highlight issues of access to care, economics of health care delivery in the region, inequitable health care resources, real estate interests and community control. Come join the conversation on this pressing issue.

RSVP not required, but greatly appreciated! Click here to RSVP.

All PNHP-NY Metro monthly forums are free and open to the public.

Michael Milligan will be performing Mercy Killers in Williamsburg, Brooklyn on Saturday, October 12th. This performance is a part of the Northside Town Hall’s Arts Happening Series.

Mercy Killers is a one-man play by Michael Milligan. Joe loves apple pie, Rush Limbaugh, the 4th of July and his wife, Jane. He is blue-collar, corn-fed, made in the USA and proud, but when his uninsured wife is diagnosed with cancer, his patriotic feelings and passion for the ethos of life, liberty and the pursuit of happiness are turned upside down.

This event was sponsored, in part, by the Greater New York Arts Development Fund of the New York City Department of Cultural Affairs, administered by Brooklyn Arts Council (BAC).

Performances are free and open to the public.

Tuesday, Sept 17 @ 5pm: Rally and March to Restore and Expand Vital Public Services for the 99%

Rally at Dag Hammarskjold Plaza in front of the UN (2nd Ave and 47th St, NYC) 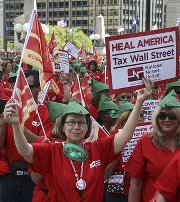 On September 17, the UN General Assembly will convene to discuss international anti-poverty and public health goals to be achieved by 2015. Against the backdrop of the UN and the OWS anniversary, labor and community activists will rally to demand an end to austerity and the full funding of human needs – locally and globally.

The Robin Hood Tax could raise billions of dollars every year to help ensure that every American has access to high-quality healthcare. This 1/2 a penny tax on Wall Street trading could fund a universal, Medicare-For-All system without mandates, fines, or hidden fees for those who can least afford them.

A Financial Transaction Tax / Robin Hood Tax was implemented in the United States from 1916 to 1966. We’ve done it before, we can do it again!

Join us at Dag Hammarskjold Plaza (2nd Ave and 47th St) in front of the UN at 5pm on September 17 to demand our elected officials restore and expand vital public services for the 99%. 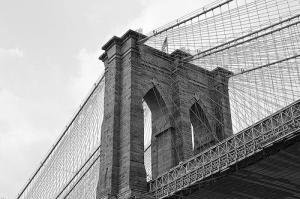 On Wednesday, July 24th, doctors, nurses, activists and advocates will march across the Brooklyn Bridge in a funeral procession – to mourn the impending closure of Long Island College Hospital (LICH) and the continued privatization of our healthcare system.
While NYC’s population continues to grow, healthcare resources continue to be concentrated in the wealthy neighborhoods of Manhattan. Meanwhile, hospitals and clinics in Brooklyn that serve working people, immigrants, and people of color are being shut down.
There are more humane ways to balance the budget than closing public hospitals or cutting social services like Medicare and Medicaid. One way to balance New York State’s healthcare budget would be to implement a universal, single-payer healthcare system in New York such as New York Health.
ENOUGH IS ENOUGH

Join us, in solidarity, for the Funeral March & Rally for Brooklyn Healthcare.

Brooklyn Hospitals are Under Attack – March and Rally to Keep Interfaith Open for Care! 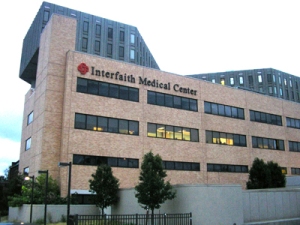 For more info check out this article on Interfaith on last week’s events.

Text @healthcarefor99 to 23559 to sign up for text message alerts